A scientist, geographer, researcher, Antonio Raimondi belongs to that group of Italians that honored their native country wherever their vision brought them, and loved their new homeland as they did the native land. His scientific legacy is among the most beautiful chapters in the universal history of natural sciences.

Antonio Raimondi was born in Milan, not on September 19 1826, as some official biographies report, but two years before, on September 19 1824, as discovered in 1989 by Giovanna Cossia in the act of baptism kept in the Aquilonare sacristy of the Cathedral. 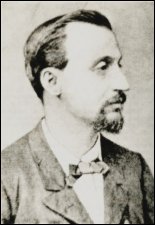 Little is known of his childhood, apart that he had an irresistible attraction to the natural sciences. The choice of Peru as a destination for his research was both conscious and emotional. The lack of scientific knowledge about the legendary land of the Incas was the first stimulus, the second came when he witnessed, in the greenhouse of the Botanical Garden of Milan, the cutting of a giant cactus of Peruvian origin, a fact that deeply affected him.

The Five Days and the Roman Republic

One of the most significant events of his life in Italy was his involvement in the independence process in Milan, from 18 to 22 March 1848, "the five days of Milan". Citizens from all walks of life, united by the libertarian ideal, managed to expel from the city the Austrian occupation troops commanded by Marshal Radetzky. Among the patriots, Antonio Raimondi joined the long list of militants who fought heroically in those terrible and glorious days. Unfortunately the victory did not last long. Disagreements among the patriots, led by Mazzini and Garibaldi, precluded the revolution, and allowed the Austrians to reoccupy Milan that same year.

Without losing his inspiration, Raimondi volunteered in the struggle for the defense of the Roman Republic formed in early 1849, after a rebellion against Pope Pius IX. This time French troops were responsible for ending the ardently defended Republican attempt led by Garibaldi. This filled Raimondi with deep regret, and, losing any hope in Italian independence and persecuted for his ideals in his own homeland, decided to undertake the long-postponed trip to Peru. In early 1850 he departed from Genoa aboard the Industria, accompanied, among others, by his inseparable friend Alessandro Arrigoni, never to return.

His years in Peru

He arrived at the port of Callao July 28, 1850, and was received by the prestigious Peruvian doctor Cayetano Heredia, who welcomed him into the college of Independence, which later became the Faculty of Medicine of San Fernando. Recognizing the great qualities of the young Italian scientist, Heredia entrusted him many responsibilities, and he was not mistaken. In 1853 Raimondi made his first official mission in the service of the Peruvian state, and his expeditions since 1858 and the publication of his most important works were financed by the Peruvian government.

He gathered a wealth of information on the coal deposits of the Peruvian coast, analyzed and quantified the guano of the Chincha Islands, checked the saltpetre of Tarapaca, walked the remote goldfields in Carabaya and Sandia, sailed the most important eastern rivers, the Marañón, the Ucayali and the Amazon, he drew the maps of the cities of Cajamarca, Chachapoyas, Huancavelica and of significant archaeological monuments, such as Huanuco Pampa or the Paramonga Fortress. He discovered Stela Chavín and the majestic Puya, both of which bear his name as a tribute to his work.

He concluded his travels in 1869 and married a "huarasina" woman, Adela Loli, who bore him three children: Enrique, Maria and Elvira, and devoted himself to his family and to complete his work. In Peru he was honored in life with the title of Doctor of Natural Sciences and Honorary Professor of the Faculty of Medicine by the University "Nacional Mayor de San Marcos".

For his prestige and seriousness he was a scientific consultant of the state during his whole life in Peru, for such diverse projects as the best route for the construction of a railway, the location of several mineral deposits, the certification of mineral samples, criteria for defining territorial borders or advice on conflicts with neighboring countries.

On 26 October 1890, exhausted by a long illness, he died, assisted by his daughter Elvira, in the house of his friend and compatriot Alejandro Arrigoni, in the town of San Pedro de Lloc, La Libertad. His remains rest in the cemetery Presbítero Maestro de Lima, in the mausoleum built in his honor. His love and dedication for Peru are a source of inspiration for future generations thanks also to a fine Museum dedicated in his name.

Raimondi belongs to the family of classical researchers of that time, called encyclopedic naturalists, who knew no natural and human limits in their motivation for learning. Nothing was a hindrance to his explorations and research, neither the most rugged territory nor the most complex field of science.

Away from Europe, of a shy character, Raimondi was undoubtedly the best known scientist in Peru in the second half of the 19th century. His intellectual merits were recognized by the most important scientific societies of the world. He was named an honorary member of the Royal Geographical Society of London, the Italian Society of Anthropology, Ethnology and Comparative Psychology and the Geographical Society of Paris.

During his travels, Raimondi gathered all he could record about the natural and social landscapes that lay in his path. Plants, animals, insects, minerals, were systematically collected while doing barometric measurements, meteorological observations and precise maps which complemented the information on the different regions explored. To this we must add his special interest in whatever he could learn and discover about current and ancient populations, observed both in contemporary houses or imagined from ancient historical monuments.

The respect and admiration of men of science of other nationalities for Antonio Raimondi is impressive. He was greatly considered by explorers as North American George E. Squier, German William Reiss and Adolph Stubel, by geologists as George Kunz, paleontologists as Louis Agassiz and Gabb, travelers as French W. Weiner, naturalists as Italian Pigorini, Polish J. Stlzmann, K. Keiski and L. Taczanowski and German Teodor Wolf. Even prestigious historians, as Sir Clements Markham, had the greatest consideration for him. Below, a map drawn by Raimondi of Lake Titicaca 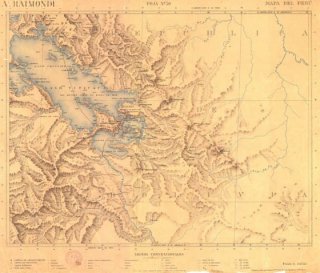