Joseph Petrosino gets credit for the great insight that New York mafia had its roots in Sicily, so much so that he traveled to Italy with a hope to destroy it. He started an impressive work that would take him to finally defeat the Mafia, which greatly feared him. He died as a soldier in the line of duty, shot in the back, in the dark, ambushed by a murderous hand that stopped the progress of the strongest, most courageous cop of all time.

The first years in New York 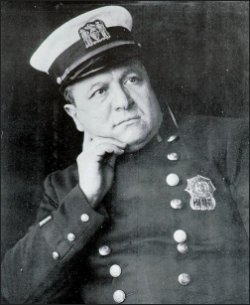 Giuseppe PETROSINO (called Joe in the States) was born in Padula (SA) on August 30, 1860. In 1873 he emigrated, very young, to New York with his father Prospero, a tailor, and his entire family consisting of his mother, two sisters and three brothers.

In New York the Petrosino family lived in the "five cents houses", made available by the municipality in Mulberry Street to accommodate the most unfortunate.

In the late nineteenth and early twentieth century, Italian immigrants in New York were half a million, a quarter of them lived in abandoned buildings on the East Side, near the Brooklyn Bridge. Little Italy was isolated by a barrier so as to keep the criminals at bay.

Since Joe was the eldest son, he adapted to any job in order not to burden the family; at 13 he was a newsboy on the streets of Little Italy, then a shoe-shine in front of the Police Headquarters of Mulberry Street. It is here that he met many agents, who went to him to have their shoes cleaned. Biographer writes Raffaele Sardo: "Being a police officer was always his dream. It was in his blood."

He studied the English language, attending evening classes, and in 1878 obtained American citizenship and submitted an application for enrollment in the police. He was rejected, tried again and again, but it was always the same story. At the end he was able to get a job in the garbage sector, which was then a small department of the town police." Knowing Italian, he became soon helpful to the police, who used him as an informant to catch Italian criminals.

Finally on October 19, 1883 he was enlisted in the New York police, and wore a police uniform with number 285 in a silver plate on his chest.

His career in the NY Police

After a short training as a patrol officer on the 13th Avenue, he began to climb the hierarchy levels, winning everybody's admiration for his methods inspired by a great passion for his job, instinct, intelligence, sense of responsibility, high professionalism. His great dream and purpose of life was only one: to defeat the mafia, then called the "Black Hand".

He accomplished legendary feats, even earning the appreciation of Theodore Roosevelt, of whom he was a great friend. At thirty, he was promoted detective, and entered the investigation section; in 1895 President Roosevelt personally made him a sergeant and in 1905 he was promoted to lieutenant, the first Italian agent to enter the Bureau; since then, he wore only dark suits, prince Albert style overcoats, with double sole shoes and bowler hat.

He took the command of the "Italian Branch", a group of five Italian agents (Maurice Benoil, Peter Dondero, George Silva, John Longomarsinie, Ugo Cassìdi), in his judgment necessary to fight the "Black Hand". In New York, between Manhattan and Brooklyn, lived around one million Italian immigrants, in the districts of Little Italy, East Harlem and Williamsburg.

He declared war to powerful Mafia bosses, responsible of 46% of all murders that were committed. He took actions that no policeman had ever been able to take, with adventurous, legendary actions, in his intelligent, determined style, without ever compromising on any level. His secret weapon was disguise, which allowed him to reach more closely into the complex world of the Mafia.

The Italian Branch was renamed Italian Legion and reinforced with thirty men. It was a team of agents with a license to kill, free to act outside the law, without the restrictions of the U.S. Constitution. Having the municipality turned down the project, the organization was funded by private citizens (thirty thousand U.S. dollars for the first year of activity). Joe Petrosino was promoted to Lieutenant. President Theodore Roosevelt for the brilliant operations against gangsterism that resulted into 500 arrests and 2500 expulsions, awarded him a Medal of Valor.

Petrosino celebrated his promotion with a few colleagues in the restaurant of Vincent Saulino. They were attended by Adelina, the owner's daughter, a 37-year-old widow. That evening after lots of Chianti, Petrosino made the proposal: "You too must be very lonely. We might get on well, the two of us, together". She just nodded.

On 7 April 1907, in the old church of Saint Patrick in Mott Street, Monsignor Patrick J. La Valle celebrated the wedding of Joe Petrosino and Adelina Saulino. The Italian Legion was all there, as well as police chief Bingham. Lunch was offered in the restaurant of the bride's father; afterwards the couple reached their rental four-room apartment at 233 Lafayette Street; no honeymoon, Petrosino had too much work.

In the summer 1908 Joe Petrosino was in bed, with bronchopneumonia. His wife Adelina wass pregnant. Meanwhile, the Italian government informed him via the consulate that they wanted to offer him a gold watch with an inscription engraved in the case: "In recognition for the intelligent work in the identification and arrest of the criminals escaped from Italian justice". Petrosino asked the New York councilor permission to accept the gift.

On 30 November 1908 Adelina Bianca Giuseppina Petrosino was born. Joe Petrosino, almost fifty, from that day, as soon as he was free from service, ran home to devote himself to his baby girl.

Towards the end of that year, the New York Police Department received a project by a skilled criminologist, an expert of the methods of Italian crime, aimed at freeing New York of the many foreigners who established a reign of lawlessness, blackmail and murder. The project was considered effective to weaken the power of the Black Hand, and its key is the collection of evidence in Italy against dangerous men; the appointment of secret agents for Italy was suggested, and sending a detective to Italy for this purpose.

His mission to Sicily

On 9 February 1909 Joe Petrosino left New York on the Duke of Genoa, travelling under the name Simone Velletri, in a first-class cabin. He had two suitcases of new yellow leather, and a 38 Smith & Wesson. The detective, however, was not happy to leave his two-month-old baby.

Petrosino was convinced that his mission was secret but in America all the newspapers talked about it. The first to give the news was the New York Herald, where Bingham confirmed Petrosino's departure for Italy "precisely to Sicily, where he will obtain important information about the Italian criminals residing in the United States." This probably started the order from New York to the Italian mafia.

From Genoa Petrosino visited Milan, Bologna, and stayed in Rome a couple of days to meet Italian officials and the American ambassador. Then he visited Padula, his ancestral home, where his brother Vincenzo was living, promising he'd come to see him again on his return from Sicily.

On 28 February Detective Joe Petrosino arrived in Palermo. A few hours later he met the American consul Bishop but avoided any contact with the police; he said to Bishop "I do not trust them at all. Here I learned things that would make your hair stand on end".

On 12 March he told Bishop of his intention to extend the investigation not only to the mafia but also to the candidates in the upcoming elections and to elements of politics and business. He had found empty files and the folders of suspects deliberately deleted, if not entirely disappeared. He wrote down on his notebook in indelible pencil: "Vito Cascio Ferro, born in Sambuca Zambut, a resident of Bisacquino, province of Palermo, a fearsome criminal." At 19.30, after waiting for a violent storm to cease, he takes hat and umbrella and goes out to dinner.

Between 20:45 and 20:50 Joe Petrosino, aged 49, police lieutenant in New York, on a mission to Palermo was killed by three shots in Piazza della Marina, in front of the gate of the Garibaldi garden, under a billboard where two posters said: "This evening, March 12, 1909, at 20, at the Teatro Biondo, debut of Paule Silver, the eccentric French" and "pure wool pillows from 2 lire to 1.75 lire". He was found with his eyes wide open, an expression on his face of fierce, impotent rage.

In the States, the first newspaper to publish the news is the New York Herald. At 2 am a reporter knocked on a door, Adelina Petrosino opened with the baby in her arms. The journalist asked about her husband but she did not know anything, "My God. What happened to him? They killed him?". At that the reporter replied that no, he was just wounded. But she went up to the first floor in tears to her brother Louis and sent him to the police station to find out more. 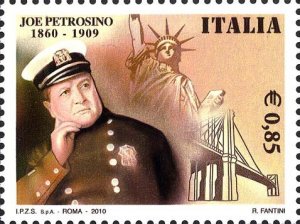 The return to the States

A state funeral was celebrated in Italy, but at the end of the ceremony consul Bishop ordered the coffin to be rushed on a ship for transfer to the States.

A month after the murder, in the old church of St. Patrick in Mott Street, Petrosino's friend monsignor La Valle celebrated a state funeral. In conclusion to his eulogy he said: "He was a man with a coat of arms, not on a parchment, but in his heart."

The day was declared as festive and in every public office in New York the flag was displayed at half mast. The coffin, carried on shoulders by his most faithful collaborators from the church to the headquarters of the Republican Party in Lafayette Street, was placed on the hearse while the police band played "Nearer to Thee, my God", and then Verdi's Requiem.

The coffin was followed by his widow and family, 1000 police officers on foot and horseback, 2000 schoolchildren, 60 Italian associations in uniform, and a crowd of about 200,000 people. The event lasted five and a half hours, and all this time the center of New York was paralyzed. The burial took place in the Calvary cemetery, at the foot of a small monument with the inscription: "Erected by Adelina Petrosino in memory of her beloved husband Joseph Petrosino, died March 12 1909 aged 49".

In 2007 Italian TV made with historic footage and partly modern actors a reconstruction of Giuseppe Petrosino's epic life, 2 parts for 180 minutes; Beppe Fiorello acted in the role of Petrosino.
ItalyHeritage on Facebook