Arturo Giovannitti, the "Bard of Freedom" 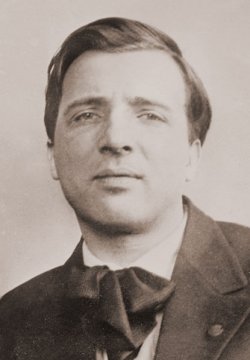 He attended school in a Liceo in Italy, then at age 17 he moved to Canada, where he pursued his studies in a Protestant seminary. After completing the courses of theology at McGill University in Montreal, he was sent on a mission as an assistant pastor to the United States. By then, he spoke English, Italian and French fluently.

In the new location, struck by the sad conditions of immigrants, he joined the trade union movement. In 1904 he settled in New York City, where he studied briefly at Columbia University and took part in the meetings of a radical cultural club on 5th Avenue with socialists, anarchists and intellectuals.

In 1906 he started a co-operation with Carlo Tresca on the socialist journal, La plebe, and began renouncing his religious commitment. In 1908 he joined the Federazione Socialista Italiana and his first poem (in Italian) appeared in the May Day edition of Il proletario, the Italian-language newspaper of the Industrial Workers of the World (IWW).

In 1909 he started an Italian-language radical journal, La rivista rossa and continued to participate as a member of Il proletario's editorial committee. Two years later he assumed editorship of Il proletario and began writing in English. 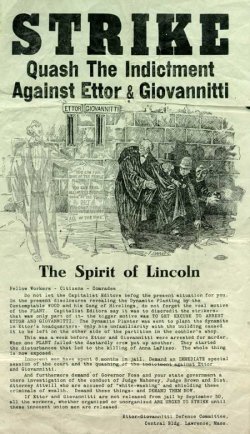 In 1912 on the outbreak of the Bread and Roses strike in Lawrence, Massachusetts, the union sent him to the place with other organizers, including Italians Giuseppe Ettor, Carlo Tresca, Nicola Sacco and Bartolomeo Vanzetti. A 16 year-old textile worker, Anna LoPizzo, was killed in a violent confrontation with the state militia.

Though many witnesses declared the worker girl was killed by a policeman in full view of 19 witnesses, an Italian worker, Joseph Caruso, was arrested for it; Giovannitti and Ettor were charged for complicity, even though the two were three miles away on the other side of town when the shooting occurred, partly because the state authorities targeted them for organizing the workers. The trial was held at Salem and was maybe the highest moment in his life: Giovannitti spoke in his own defense at Salem Court House, November 23, 1912. All defendants were eventually found innocent by a jury, after spending months in prison.

The event had a huge echo in Europe and throughout the civilized world. In Italy rallies were held in the smallest center, in Giovannitti's hometown a committee was created by his friend Alberto Barbieri, and Benito Mussolini, at the time still a member of the Socialist Party, spoke in defense of the accused in meetings, wrote articles and presented motions until the eve of the judgment of acquittal.

Giovannitti's speech was memorable: from the classics he had learned how to make a speech simple and strong, and, as in ancient Greece and Rome, he pleaded his cause describing the events of those days, the characters and their actions, addressing the feelings of democracy and justice of the jury and the ideals of freedom engraved in the American constitution. 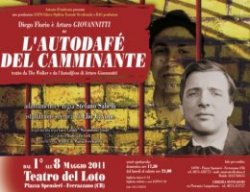 While awaiting trial, Giovannitti wrote a strange, passionate text in a highly poetic, enchanting prose, "The Walker", possibly the best English poem ever written about being in jail, side to side with Oscar Wilde's Ballad of Reading Gaol; the poem was published in The Cry for Justice: An Anthology of the Literature of Social Protest 1915, Upton Sinclair, ed. (1878-1968).

In the following years he continued both his engagement in workers' struggles, and his journalist and literary writings. In 1914 he translated into English Emile Pouget's Sabotage, which was almost the bible of the IWW in the early 20th century, Leopold Kampf's drama On the Eve, and published his first book of poems in English, Arrows in the Gale.

In his articles he campaigned actively against involvement in the world; both his brothers were to die during World War I, serving in the Italian Army. In 1923, after Mussolini had taken control of Italy, he organized the Anti-Fascist Association of North America, and in the following years he edited an Italian-language journal, Il veltro. In 1925, with Giuseppe Ettor he lobbied for the release of Sacco and Vanzetti.

In the 1930s he gradually stopped writing for the American press and centered on his leftist activities. His heavy drinking habits started affecting his health. Giovannitti also gave a noble commemoration at the funeral of Italian anarchist and friend Carlo Tresca, murdered in 1941 by Lucky Luciano, it seems on Mussollini's orders.

In the 1940s and 50s his health continued to deteriorate. He became separated from his second wife Carrie, and eventually ceased all writing and political activity, dying in poverty and solitude in the Bronx on January 31, 1959. He was survived by a son, Lenin, and two daughters, Roma and Vera.

Giovannitti was a director of newspapers and magazines, wrote poems in a fine English, as well as in Italian, filled with a deep longing for home and his native land; he edited translations from the French language and was also the author of plays and social sketches.

According to Fred Gardaphè, Professor of English and Italian American Studies at Queens College, NY, Giovannitti

"represented an important reference point for the different Italian-American authors that spoke to the public about the stories of the Italian-American working class [...] influencing more recent authors such as Pietro Di Donato and Augusto Lentricchia [...] In his poem "The Walker", he expressed the radical spirit of a man who didn't believe in the traditional forms of government, such as the Italian monarchy, and had come to America seeking a better and freer land."
Sadly, in spite of his large number of works, Giovannitti remains unknown to a large majority of readers, both in Italy and the United States. Because of the political climate of the Fascist decades, Italy long ignored him: "The Walker", written in 1914, was translated into Italian as "L'uomo che cammina" only in 1938.

His play "Com'era nel principio di tenebre rosse" written in 1916 was performed in English on Broadway only once; while World War One was raging in Europe, he created an anti-military piece describing the de-humanizing effect of war: he centers the story on a young poet who turns into a ravage beast to take revenge on a German soldier who had raped his wife leaving her pregnant.

Marcella Bencivenni (marcellabencivenni.com), a history Professor at Hostos Community College of the City University of New York, explains in her book "ITALIAN IMMIGRANT RADICAL CULTURE - The Idealism of the Sovversivi in the United States, 1890-1940", that in America, also among the Italian American communities, Arturo Giovannitti wasn't highly considered because of his radical ideals. In Bencivenni's words:

"I discovered that Giovannitti was part of a transnational generation of social rebels, [...] immigrants who were radicalized in America [...] While revered within the Little Italies and the American labor movement of the early twentieth century, these men and women seemed to have vanished from history. [...] In part I wrote this book to rescue these untold stories from historical oblivion, and challenge the highly generalized view of Italian immigrants as a compact block of conservative, apathetic and apolitical peasants."
Undoubtedly, Giovannitti was one of the greatest voices speaking for the Italian, and all working men in the United States. And his activist spirit was deeply connected to his soul as a poet.