Federico Fellini is the film director on whom most works were, and are still being written. Between 2002 and 2004, the Fellini Foundation has collected in three volumes bibliographical information of everything in the world was published on the director.

His filmography includes 24 titles (including those he co-directed, or episodes of movies) shot between 1950-1990. Along his path, Federico Fellini received honors and awards, including the Legion of Honor (1984) and the Praemium Emperor of Japan (1990). Fellini is one of the directors who won the most Oscars, five, of which the last, to the career, a few months before his death in Rome on October 31, 1993. 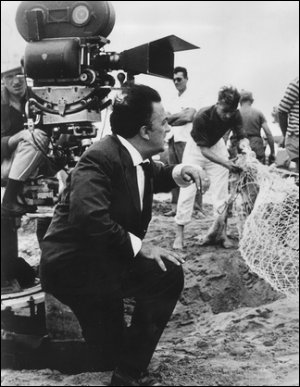 Federico Fellini was born in Rimini on January 20, 1920, the son of Ida Barbiani, from Rome, and Urbano, a sales representative from Gambettola a small town in the province of Forlì-Cesena.

After running away from home at the age of twelve to work in a circus, he attended the local grammar school in Rimini, earning at the same time his first money as a caricaturist of famous actors and vacationers.

From the early months of 1938 he began working with the "Domenica del Corriere", which published a number of his comic sketches. In January 1939 he moved to Rome with his mother, with the excuse of studying Law at the university; instead he started working for "Marc'Aurelio", a satirical magazine, becoming popular through hundreds of sketches signed "Federico".

Before the outbreak of the war he became friends with Aldo Fabrizi writing monologues for him, and collaborated with a radio variety where he met young actress Giulietta Masina (1921-1994), whom he married in October 1943. They will only have one son, who died a month after birth.

By participating to the scripts of Fabrizi's films, he began his adventure in the cinema as an author and screenwriter of great movies, including "Roma città aperta" (1945) and "Paisà" (1946) starting a fruitful friendship with Roberto Rossellini.

He became associated with playwright Tullio Pinelli, and they became among the most popular scriptwriters of the time, working with Pietro Germi and Alberto Lattuada. The latter wanted him as an assistant director in Luci del varietà (1950). 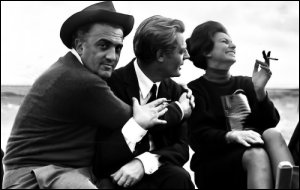 In "Lo sceicco bianco" [The White Sheik] (1952), Fellini began his successful partnership with composer Nino Rota, moving away from the neorealist tradition and creating his first characters suspended between a fantastic and ironic levels. One year later he reached his first success with I vitelloni (1953), awarded a Silver Lion in Venice, a movie that also marked the launch of actor Alberto Sordi.

"La strada" followed in 1954, starring his wife Giulietta, an Academy Award-winning movie, the first in a series that will place Fellini among the great film masters in cinema history.

The following years he made masterpieces as "Le notti di Cabiria" (1957), which earned him a second Oscar, "La dolce vita" (1959), Gold Palm at Cannes, "8 e 1/2" (1963) which won him his third Oscar. The main protagonist of the last two movies was Marcello Mastroianni, Fellini's favorite actor.

In 1990 Federico Fellini directed his last movie, almost a spiritual tribute: "La voce della luna", a poetic reflection on the absurdity of the present and an invitation to silence.

Federico Fellini - speaking English with his Italian accent, thanking "Marcellino" (Mastroianni) and asking for another kiss from Sofia, urging his wife Giulietta to stop crying... a great tribute from the American movie world to a great Italian.

It was in the winter of 1993, and he jokingly said he expected the recognition, but in 20 years' time... he passed away exactly 20 years ago, on 31 October of that same year, and Giulietta Masina followed him in March 1994 - a wonderful story of love and shared passion for the cinema world.