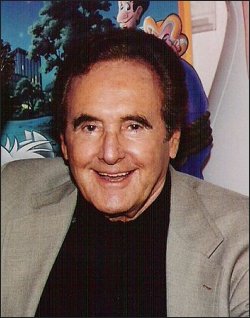 Born on the Lower East Side of Manhattan, New York, he was the eldest of three sons of Vincent Barbera and Frances Calvacca. His parents came from Sciacca, province of Agrigento, Sicily, and the young Joseph grew up in an Italian-speaking environment. His father Vincent Barbera had three barbershops in Little Italy, but was not a strong paternal figure, as he liked gambling and abandoned the family by the time Joseph was 15.

In an article "in memoriam" published in the Italian magazine "Il Giornale" on 20 December 2006, journalist Federico Fiecconi reports how, to the question of who he admired most, Joseph Barbera replied: "My grandmother Francesca Calvacca, who arrived in Manhattan from Sciacca, Sicily, in 1898, raised 5 children and helped my mother to raise me and my two brothers. Apart from me, nobody in the family knew how to draw, but my grandmother was endowed with a great sense of humor. Raising a gang of nine Sicilians requires an exaggerated sense of humor, at least to avoid a bloodbath. I like to think I've inherited a bit of her spirit."

At the end of the 1920's he saw his first animated film, "The skeleton dance" by Walt Disney, and his imagination was on fire: he wrote to his hero, and he received a reply where Disney foretold a future visit to Manhattan. But, as Joe Barbera commented, luckily Disney never contacted him again, otherwise he would have dropped everything to join his staff.

In his 20s, Joseph Barbera gave up a safe job in a bank to go west and follow his dream to combine sounds, colors and patterns on the screen, creating a fantasy world. In 1932 he became an animator and writer for the Van Beuren studio, and in 1937 he was working at Metro-Goldwyn- Mayer. In 1938, he met here an Irish youth, William Hanna, just hired by the MGM comics studio, and the two became a perfect couple on the job, Laurel & Hardy style, inventing the stories of the cat Tom and mouse Jerry, and for nearly two decades they worked with a large staff producing over 200 short films in the Tom and Jerry series.

Barbera would write the stories, draw sketches and make up the gags, while Hanna was in charge of directing. In 1957 MGM closed their cartoons sector, and the two artists decided to start their own company, Hanna-Barbera Productions Inc., with a studio in Hollywood in 3400 Cahuenge Boulevard , on the same premises of Highland Avenue where Charlie Chaplin comedies had been shot. Here a whole world of unforgettable characters were born: Huckleberry Hound, Yogi Bear, The Flintstones, The Jetsons, Quick Draw McGraw, Scooby Doo, The Pink Panther, The Smurfs, and more.

In a landscape dominated by the genius of Walt Disney, more than ten years older than him, the boy from Little Italy won 7 Oscars for best animated short film of the year. Disney was the magician of lavish, baroque, visionary dreams. Joseph Barbera was the inventor of the TV cartoon, used and consumed by Americans on their sofas, with hyperkinetic characters, and voices provided by brilliant actors. The study expanded to include 800 employees and reached an unchallenged dominance, particularly in the television serial cartoons. Joe Barbera was an enormous talent, a virtuoso at drawing, sketching characters, introducing projects to sponsors, closing agreements. A modern artist that became a businessman as well, out of necessity.

But the world was changing. In the 1980s the Hanna-Barbera productions tried all possible techniques to reduce costs. The design was kept two-dimensional, very simple, both for the characters and for the background, with no use of perspective or shades but only solid colors, recurring movements of the characters, with the only parts moving being the legs and the head, often only the mouth and eyes. Despite these strategies, because of rising production costs Hanna-Barbera was sold and absorbed, along with its sister company Ruby- Spears, by the Taft Entertainment Group.

In his later years "Mr. B.", revered as a living monument, liked to speak of the pioneers of cartoons, shiny and cute as only a brash successful Italian can be. Up to 90 years of age he had continued to go to his office, as long as in the next office Bill Hanna came to keep his things in order. When his lifetime partner passed away, the combative Sicilian felt probably that he had lost a leg, or more, and all future horizons.

Joseph Barbera kept his contacts with Italy alive, serving as honorary president of the "Cartoon on the Bay" festival, organized since 1995 on the Amalfi Coast by RaiTrade. The edition of April 2006 hosted a preview of the last cartoon written and directed by Old Joe: a reunion of Tom and Jerry, "The Karate Guard": garish colors, relentless rhythm, and a wonderful déjà vu of cartoon classics.