Among the best known of Sandro Botticelli's paintings, dated about 1482, it was, according several sources, made for Lorenzo di Pierfrancesco de' Medici (1463-1503), a second cousin of Lorenzo the Magnificent. The painter known as Sandro Botticelli was born Alessandro di Mariano di Vanni Filipepi (Florence, March 1, 1445 - May 17, 1510). 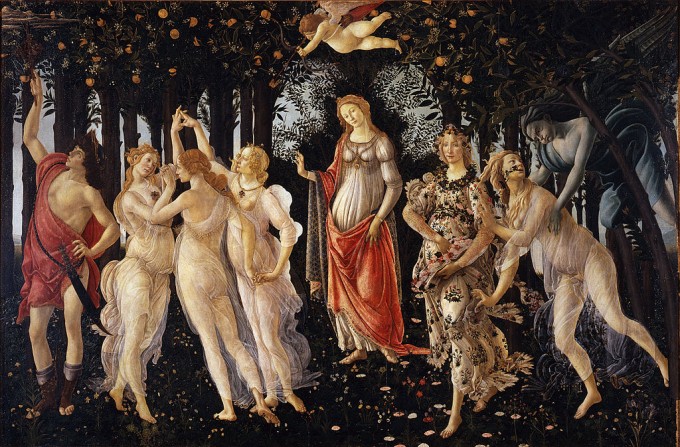 The scenario of the painting is a grove of orange and other fruit trees, a blue sky in the background, and in the foreground a lawn of hundreds of different plants and flowers. Nine characters are represented, revolving around a central character, a lady with a red mantle. The true meaning of the painting is still rather obscure, and various reading levels have been identified in the centuries: a widely shared mythological reading, a philosophical one linked to the Platonic Academy, and a historical-dynastic level linked to the Medici family and Florence.

According to the mythological interpretation, we are in the garden of the Hesperides, a legendary place where a tree of golden fruits grew, guarded by a dragon and three nymphs. The first character on the right is Zephyr, the spring wind that kidnaps the nymph Chloris, who becomes pregnant and is reborn as Flora, or spring itself, represented as a woman in a flowered dress, scattering flowers from her lap.

In the center, on a higher position, is Venus, symbol of the highest love, overlooking the scene around, and above her head Cupid, her son, flies and targets his arrow to the centre od the dancing group. To the left of Venus are the three Graces, dancing. On the far left is Mercury, the messenger of the gods with wings at his feet, who with his Caduceus dispels the clouds to keep an eternal spring.

The earliest philosophical interpretation was proposed by Aby Warburg in 1893: the painting would be the representation of Venus after her birth, arriving in her kingdom. According to Ernst Gombrich the "Primavera" would show how love, in its various degrees, raises man from the mundane to the spiritual world: Zephyr and Chloris represent sensual love, which is a source of life (Flora) and, through the mediation of Venus and Cupid, is transformed into a more perfect ideal (the Graces) and then raised to the celestial spheres under the guidance of Mercury.

According to a historical interpretation, the characters in the painting represent Florentines and their virtues. It seems that the work was initially commissioned to Botticelli by Giuliano de' Medici on the birth of his son Giulio (who was to become Pope Clement VII) from Fioretta Gorini, whom he had secretly married in 1478 (in a first version, Fioretta would be represented as Venus). But Giuliano died in the Pazzi conspiracy against his brother that same year, a month before his son's birth, so the painting was then "recycled", so to say, for the wedding of his cousin, Pierfrancesco de' Medici, including his portrait in Mercury's face and that of his wife, Semiramide Appiani, in the face of the Grace in the center looking on Mercury.

But the central Grace might also be Simonetta Cattaneo (Fezzano, January 1453 - Florence, 26 April 1476), the wife of Marco Vespucci, loved by Giuliano de' Medici, and considered by his contemporaries the most beautiful woman alive, who was Sandro Botticelli's model for the "Birth of Venus" and other paintings. Among other things, the painter asked to be buried in the church of Ognissanti, Florence, at the feet of Simonetta, who died of consumption at the age of 23.

According to Horst Bredekamp, the painting could be interpreted also as an allegory of the golden age in the Medici Florence: Flora (the Latin name of Florence was Florentia) would be an allusion to the ancient origins of the city. Other studies have suggested that the painting is a kind of agrarian calendar of the good season, a neverending spring from February (Zephyr) to September (Mercury).
ItalyHeritage on Facebook