Perhaps the greatest sculptor of the 17th century and an outstanding architect as well, Bernini created and developed to unsurpassed levels the Baroque style in sculpture. 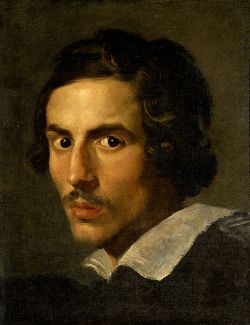 Gian Lorenzo Bernini was born on 7 December 1598 in Naples, birthplace of his mother Angelica Galante, who had married Pietro Bernini (1562-1629), a renowned sculptor born in Sesto Fiorentino, in Tuscany, in Naples to work at the Certosa of San Martino. When Gian Lorenzo was six, the family moved to Rome, where his father started to work under the protection of Cardinal Scipione Caffarelli - Borghese, who was soon to notice the precocious talent of Gian Lorenzo.

In the early 17th century Rome was a city of exceptional and revolutionary artistic fervor that welcomed artists from all over Europe, including Caravaggio, Annibale Carracci and Peter Paul Rubens.

In Rome, young Bernini was able to admire the works of famous artists: the frescoes on the ceiling of the Sistine Chapel and the great dome of St. Peter's Basilica, both works of Michelangelo. He also met Annibale Carracci, who was painting, on the ceilings of the Pope's rooms, bright and colorful scenes inspired by the legends of ancient Rome. He saw Caravaggio's paintings, with dark, sad and often frightening tones, whose characters seemed to breathe and feel pain. At age 20 Gian Lorenzo was a sculptor; he had learned the technique from his father, from Carracci and Michelangelo the storytelling skills, from Caravaggio how to give life to characters.

An important figure in the Roman Catholic Church, Cardinal Scipione Borghese, saw his work and became his patron, paying Bernini to make many beautiful sculptures for him and his family. Soon the Cardinal's uncle, Pope Urban VIII, the most powerful man in Italy, heard of Bernini and asked him to work in the Basilica of St. Peter. To this task Bernini devoted the rest of his life, realizing the "Baldacchino" and the four niches, the throne of St. Peter, St. Peter's Square, the Chapel of the Sacrament. The artist died on 29 November 1680 at age 81, after working for St. Peter's for 40 years of his life.

A student of classical sculpture, Bernini possessed a unique ability to capture the essence of a narrative moment with naturalistic realism. He was indeed the heir of Michelangelo, with a talent that exceeded the boundaries of sculpture merging sculpture, painting and architecture into one visual concept, reaching, as defined by art historian Irving Lavin, "the unity of visual arts."

Gian Lorenzo's "coming of age" can be seen in his David, whose face is actually a self-portrait. Scipione Borghese, who is said to have been holding a mirror while Bernini transferred his own features into those of David, was to become a pope soon. From that moment onwards, Bernini was to be the favorite artist of popes, leaving an indelible mark on the city of Rome.

In his early years as a sculptor Gianlorenzo Bernini made for Cardinal Scipione Borghese four large sculptures that can still be seen in the Galleria Borghese in Rome. The first three are groups from classical mythology, the fourth is a David:

Bernini was in constant competition with himself, and each work was technically more daring than the previous one. This struggle is also evident in his private life, and a passionate love story that ended in a horrible way, with Constanza, the wife of Matteo Bonarelli, one of his pupils. An anonymous document, never proven however, says that the brother of the sculptor, Luigi, also entertained a relationship with Costanza: when Gian Lorenzo had his suspicion confirmed, he beat his brother with a crowbar, and sent a servant to disfigure Costanza slashing her face with a razor; he was able to avoid being prosecuted for the crime and just paid a fine thanks to Pope Urban VIII.

However, between 1636 and 1638 Gian Lorenzo Bernini made a marble bust, 72 cm high, of his mistress Costanza Bonarelli, which is currently preserved in the Bargello Museum, Florence. The bust was made by Bernini for himself, and remained long in the sculptor's house. A rare and unusual subject, the bust portrays the woman as she would appear in her privacy, with unkempt hair, a light dress with a simple ribbon that follows the neckline giving a glimpse of her breasts. 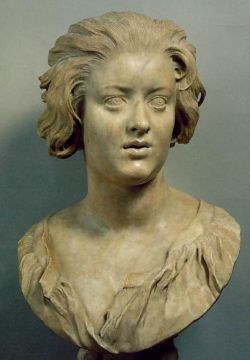 In 1639, at 41, Bernini had an arranged marriage with 22-year-old Caterina Tezio, who bore him eleven children, the youngest of whom, Domenico, became his father's first biographer.

Among the most famous sculptures by Bernini, "The Ecstasy of St. Teresa" (1647) represents the saint of Avila having a vision of an angel so beautiful to make her faint; Teresa is lying on a cloud with the smiling angel in front of her, the robes of the two figures moving in the wind. Bernini also designed the walls of the chapel, which becomes a kind of marble stage, and carved on a wall a marble balcony with characters, members of the family that commissioned the chapel. 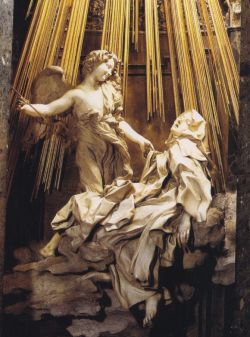 The Years in St. Peter's

Bernini started his work in St. Peter's with the Baldacchino above the main altar, 30 meters (98 feet) high, probably the biggest bronze object in the world. It is located under the dome of Michelangelo and has four huge twisted bronze columns decorated with olive leaves and bees, which were the symbol of Pope Urban; the face of a newborn on the columns is the son of a niece very dear to the pope.

The dome of the Basilica is supported by four massive stone pillars. Bernini had the idea of carving into them four "niches" where to put huge statues representing the four precious relics preserved in St. Peter's: a piece of the True Cross of Jesus, a veil which a woman used to wipe the face of Jesus ascending the Calvary, the spear that pierced Christ's side, and the bones of St. Andrew, St. Peter's brother. The project was to include in the niches the statues of St. Helena, who found the cross, St. Longinus the soldier with the spear, St. Veronica, who wiped the face of Jesus and St. Andrew. Three statues, except for St. Longinus, were however made by other sculptors. 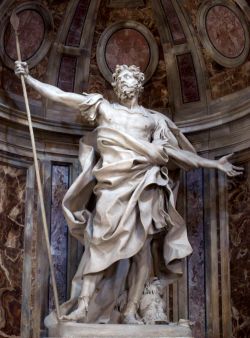 A subsequent work by Bernini (inaugurated with great celebrations on January 16, 1666), was to create a bronze throne to contain an ancient wood and ivory throne that had been in St Peter's for over 500 years, the so called Cathedra Petri or "throne of St. Peter." The throne, that sits at one end of the basilica, is supported by four bronze statues representing the "doctors of the Church", Ambrose and Augustine for the Church of Rome, Athanasius and John Chrysostom for the Orthodox Church. Above the throne there is an alabaster window in whose center is a dove - the Holy Spirit - with rays of light flooding the basilica through golden clouds and angels. 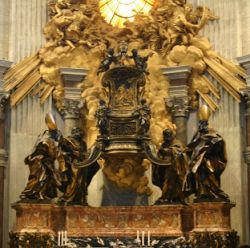 St. Peter's Square was designed by Bernini and built between 1656 and 1667, but was not an easy assignment, considering the problems that the architect was called to solve. First, the facade designed by Carlo Maderno (Capolago, 1556 - Rome, 30 January 1629) looked too wide, so Bernini had to make it look narrower. Secondly, in the old square Pope Sixtus V had placed a precious ancient Egyptian obelisk, 40 meters (131 ft) in height from the base to the cross on top. The obelisk was supposed to be at the center of the new square, but it was very difficult to move. The third problem was that Maderna had built a fountain on one side of the obelisk and Bernini had to design another to balance the project.

Bernini solved the problems creating two areas instead of a single huge one: one area, almost square, just in front of the facade, sloping to the sides so as to make the facade look higher, and therefore narrower. The second area is oval, with the obelisk in the center and two fountains on either side along the bigger axis.

The two sides of the square are surrounded by a covered colonnade, dominated by large statues of saints who seem to look down on the thousands of visitors who come to the square each day. The colonnade is formed by two wide arches similar to open arms welcoming and leading visitors into the Basilica. A famous architecture historian, Sir Banister Fletcher, said that no other architect except Bernini could imagine so grand a project, the most beautiful entrance to the most beautiful Christian church in the world.

The last work of Bernini in St. Peter's, in 1676, was the Chapel of the Sacrament. He designed it as a miniature temple, in bronze covered with gold, just like the one built on the site of the martyrdom of St. Peter. On both sides there is an angel, one in worship and the other looking towards the visitors as to welcome them. 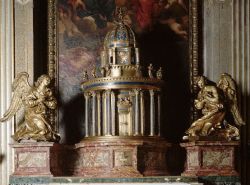