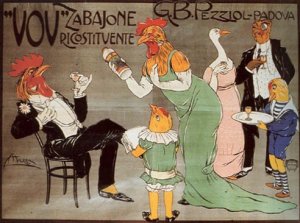 Vov is the brand name of a liqueur made from eggs with 17.8% alcohol content. The palindrome monosyllable VOV derives from the Venetian dialect word vovi (= eggs). The same name is also commonly used today for homemade zabaione (= eggnog) liquor.
As to the "zabaione" (alternative spelling in Italian are zabaglione and zabajone - it had existed for centuries, and the term is of uncertain etymology. A tradition claims that the recipe was introduced in Turin in the 16th century and initially called San Baylon cream, in honor of Franciscan San Pasquale Baylón, protector of cooks and pastry chefs, changing then to Sambayon. Another theory derives the name from zabaja, a sweet drink of Illyrian origin common in Venice.

VOV was invented in 1845 by Gian Battista Pezziol, a confectioner of Padua specialized in the production of nougat, which required just the egg whites. Pezziol decided to use the remaining egg yolks with marsala wine, alcohol and sugar, to make a kind of zabajone liqueur and energy drink tonic much in vogue at that time.

In 1856 the commercial success of the new liquor was already remarkable and Pezziol received a silver medal for the quality of the drink. The same year VOV was presented to the court of Vienna (Padua was at the time part of the Austrian kingdom), where the Archduke gratly appreciated it and issued a solemn patent with the royal double-headed eagle. 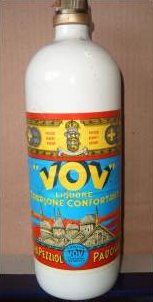 During the Second World War, for its energizing properties Vov was provided to the troops engaged in combat with the name of VAV2 (Vino Alimento Vigoroso = Wine Vigorous Food). The drink reached its peak at the turn of the 1960s and 1970s, when it had numerous imitations and competitors, of which today only Zabov of Moccia Distilleries survives.

In the 1980s and 90s, due to the strong xenophilia in young people's eating habits, and the arrival of the first foreign carbonated energy drinks, VOV experienced a period of decline. However, it survived thanks to the ever present demand in bars and pubs of winter sports resorts.

The Padua roots of the product were gradually lost: the production was first moved to Pozzilli and in 2012, after the acquisition of the brand and recipe by Molinari Spa to Torino Distillati of Moncalieri. In recent years VOV has met a revival thanks to a cocktail, the bombardino, where it is the key component; it is fashionable again, especially on the ski slopes, and the general tendency to re-evaluate the historical food and drinks of the Italian tradition. The current ownership expressed their intention to take advantage of the positive moment for a re-launch of the product.

The cylindrical white glass bottle of VOV, present since the beginning, has gradually become an icon of the Italian liqueur world. During the Second World War, a period when the production of VOV was almost exclusively addressed to the military as VAV2, for convenience of transport the liquor was packed in sealed cardboard boxes.
Currently the product is packaged in a bottle of common transparent glass covered with a sheet of white plastic, which mimics the traditional white glass bottle, but as well as being less valuable, this poses problems about the proper disposal and recycling of the materials. The label, very traditional and unchanged for decades, is dominated by the iconic three-dimensional yellow "Vov" on a blue background, superimposed on a stylization of the Basilica of Saint Anthony of Padua.
The manufacturer recommends the liqueur as an invigorating drink, both hot as a tonic, and refrigerated or even frozen as a granita (frozen Vov). Its flavor is comparable to the zabajone, though it is more fluid and with a higher percentage of alcohol, making it suitable to accompany many kinds of dessert, also as topping. Often it appears in the zabaglione ice cream recipes.

The Bombardino is a drink made of cream, hot VOV, brandy and coffee (the recipe varies depending on the area). It originated in Lombardy, actually at Livigno, in the province of Sondrio, in the Mottolino mountain cabin, but it is now common in many ski resorts throughout Italy.

Its name derives from the blast of heat that follows after drinking, due both to a reaction to the drink temperature and its alcohol content (about 30°). Three variants of the cocktail are common, always based on hot VOV:

Legend has it that a young Genoese, whose name is unknown, turned his back to the sea to go and live into the mountains. After a long period as an Alpini Officer, he took up the management of the Mottolino hut. Four friends sitting at the bar in the shelter began to think about a possible cocktail that could warm them in the bitter winter cold. And they came out with milk, whiskey and VOV, all heated almost to boiling point. A customer tried it and said, «Accidenti! È una bombarda!» [= Damn! It's a bomb]" The Genoese man did not need to be told twice and called it Bombardino.

With time, milk was replaced by cream, and whiskey with brandy or rum. The recipe spread to the other huts, and the bombardino became commonly served in other wine shops in the village and later in almost all ski resorts in Italy.