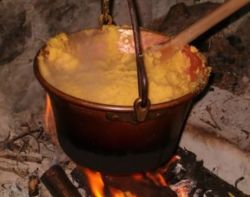 Polenta is an ancient of Italian origin made from flour obtained from a number of cereals, the most commonly used today being corn.

Presently known almost throughout the Italian territory, in the past it was the staple food in mountain areas of Lombardy, Veneto, Piedmont, Valle d'Aosta, Trentino, Emilia Romagna, Tuscany, Marche and Friuli-Venezia Giulia.

Corn or maize, imported to Europe from America in the 16th century, gives polenta its typical yellow color, whereas before the introduction of corn it was darker, made mostly with spelt or rye, and later also with buckwheat grain, imported from Asia. 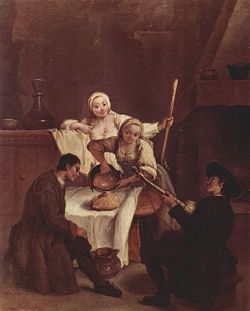 Polenta is made by slow cooking a semi-liquid mixture of water and cereal flour (usually coarse). Today the classic yellow polenta is made from corn; the flour is usually stone-ground (bramata) more or less finely according to the tradition of the region.

The flour is poured a pioggia (like rain) into boiling salted water in a paiolo (copper pot), and stirred with a cannella (= hazelwood stick), for at least an hour. It's ready, according to tradition, when la cannella sta su, that is, the stick remains standing on its own if left in the pot. Polenta is then poured onto a wooden plank and served, depending on its texture, with a spoon, or made into slices with a wooden knife or with a cotton thread from bottom to top.

The term "polenta" derives from the Latin "puls", a sort of porridge made of "far" (farro, a Latin cereal of which there exist regional variants) which formed the basic diet of ancient Italic peoples, while the Greeks usually employed barley flour. Before the introduction of maize from the American continent, polenta was made also with other grains such as, in addition to barley and farro, rye, millet, buckwheat and wheat.

Some researchers [Sonnante, Hammer, Pignone From the cradle of agriculture in handful of lentils: history of domestication, Rendiconti Lincei, 2009, 20: 21-37] argue that the puls was originally a mixture that included legume seeds. To this regard it should be noted that, especially in some regions of Southern Italy, a polenta is still in use made from broad beans accompanied with such vegetables as chicory.

The first documented cultivation of maize in Northern Italy dates back to Lovere, in Valcamonica. Gabriele Rosa [La Valle Camonica nella Storia, San Marco, Esine 1978, p. 156-157] argues that the cultivation of maize was introduced in Lovere in 1638, for the first time in Italy. M. Compagnoni [Costa Volpino, ed S. Vincenzo, Clusone 1976, p. 189], attributed the introduction of this crop to Pietro Gajoncelli, who in 1658 imported the first grains of corn from the Americas.

What is certain is that, starting from the late 17th century, cornmeal was to surpass chestnut flour in the daily consumption of the inhabitants of Valcamonica. Lino Ertani [Vita camuna di un tempo] mentions a report from the parish priest of the village of Darfo, dated July 10, 1741, who wrote: «The village of Darfo consists of 784 souls... of these, most in the morning eat polenta and a good part of them again eat it in the evening.»

Polenta in Central and Southern Italy

In central Italian regions polenta takes on a different aspect. It is prepared more fluid and served on a rectangular wooden table called spiendola in Marche or spianatòra in Umbria, made of cherry or pear wood, around which the whole family sit down to eat. The cooking is done in the characteristic copper pot for at least 45 minutes, during which time the polenta is continuously mixed with a special cannella of manna ash or hazel wood, called sguasciapallotti (the name means that it breaks small pellets).

The polenta of Sardinia, also known as "purenta", pulenta or farru (from barley) seems to have existed since the Nuraghe civilization (3000 BC), as shown by archeological findings of mortars and other instruments used for processing this food, and from fossil grass plants.

In ancient times the Romans used to eat a polenta of barley and farro, and during their occupation of Sardinia, between 238 BC and the 456 AD, they transformed the Campidano plain into fields for the cultivation of grain products, so much so that Sardinia came to be known as the "granary of Rome".

In more recent times, wheat still remains the main cereal of this traditional dish of the island, although chestnuts and acorns were also used, or other products as oats and rye during the Middle Ages, and later rice. The Sardinian cornmeal polenta is accompanied by sausage, pecorino cheese, lean bacon and such vegetables as garlic, onion, carrot, celery, parsley, to flavor.

The polenta can be conveniently matched with a medium red wine or also a novello, obtained from whole grape fermentation, such as the Cabernet-Merlot, Sauvignon, Cabernet - Sauvignon, Barbera, Cabernet, Red Trentino, Red of Val d'Aosta, Sassella and Inferno.