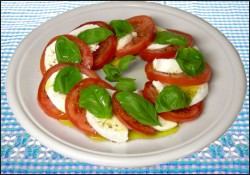 As with many great Italian cuisine inventions such as pasta and pizza, for the Caprese salad as well origins are not precisely known. It is easy to fall in love with this simple but refined dish, which has in itself the colors and flavors of products that have made the history of Italian cooking: tomato, basil and mozzarella. The caprese is also a lifestyle, being an uncooked dish where ingredients are everything, and the taste is simple but intense.

Some sources report it was an invention of a patriotic mason who after World War I loved to enclose the colors of the tricolor inside a fragrant bun. Surely the first historical mention is from the early 1920s when it appeared in the menu at the Hotel Quisisana where Filippo Tommaso Marinetti, founder of Futurism, in the summer of 1924 raged against pasta calling it "outdated".

Decades later, precisely in the 1950s, it is reported that King Farouk, asking for something light as an afternoon appetizer, was served a sandwich stuffed with mozzarella, tomato and basil. It is therefore definitely one of the discoveries of the twentieth century.

With mass tourism the caprese ceased to be a Capri recipe and became an international dish, a Mediterranean dream just as a quick sandwich on the streets, in motorway and airport autogrills. Meanwhile, the dish was improved when the traditional vaccine mozzarella started to be replaced with bufala mozzarella, a dairy product typical of Campania.

What are the secrets of a good caprese? Everyone has their own, but the basic rules on the island of Capri are as follows.