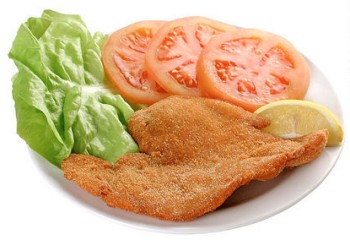 The Cotoletta is, together with Milanese risotto, ossobuco and panettone, among the most typical dishes of Milanese cuisine. Also called "costoletta" or "fettina panata", is an exquisite, ancient recipe, appearing in all famous cuisine books and restaurant menus, but also traditionally used in families especially to make meat tasty for children (as meatballs).
In 2016 thousands of restaurants worldwide celebrate one of the symbols of Milanese cuisine during the 9th International Day dedicated to Italian specialties. In past 8 editions the IDIC chose spaghetti alla carbonara (2008), Risotto alla Milanese (2009) Tagliatelle al Ragú Bolognese (2010), Ossobuco in Gremolata alla Milanese (2011), Pesto alla Genovese (2012), Tiramisù (2013), Spaghetti al Pomodoro (2014), Parmigiana di Melanzane (2015).

The secret of a good coteletta is all in the cook's intelligence and expertise: choosing a tender meat cut, breading immediately before cooking, perfect control of the cooking temperature. Traditionally, the meat was thick and with bone, so that once cooked it would be rosy inside near the bone. Modern preparations prefer at times a thin boneless version, where the meat is beaten during crumbing to make it still thinner.

Clean the meat of any skins or nerves, slightly salt on both sides. Pass the meat into the eggs beaten in a deep bowl, and quickly in the breadcrums, on both sides.

As with many other recipes, also the cotoletta gives rise to debates among the most famous gourmets, starting from the meat cut: high or low? As a matter of fact, as the poet said with all fine things in life, As you like it. For example, in the elephant ear variant - wide and thin - the meat should remain tender, or its taste would be lost and you will only eat fried bread and egg.
There are many secrets and techniques to the recipe. Two-starred chef Claudio Sadler prefers veal sirloin, but also pork, though a lean cut. The breading is in the yolk only, then Sadler uses a mixture of Altamura bread crumbs and Japanese panko, which makes it crisper. Everything must be done on the spot, so the breading will not have time to moisten or fall off. Finally he serves it sliced to highlight the area inside, where the meat is rosy - and sprinkled with Maldon salt.
In the US cooking traditions many variations were introduced, as the chicken cutlet, based on breast or other chicken or turkey meat parts, that spread throughout the world thanks to fast food restaurants. The cutlet is prepared passing chicken meat in flour, egg and breadcrumbs, and then frying in a pan with oil or butter. The cordon bleu is also an American invention, first mentioned in a New York Times article in the late 1960's.
The milanesa is a dish common in South American countries where generic types of breaded meat fillet preparations are served. The original recipe, as the name suggests, was most probably brought to South America by Italian immigrants during the mass emigration between 1860-1920s. 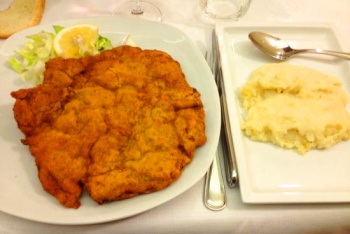 History of the Cotoletta

The dispute between Milanese and Austrians began under the Austro-Hungarian Empire, when the Milanese were accused of having copied the Wiener Schnitzel. This was a Viennese recipe consisting of a thin slice of veal, never with bone, breaded and fried in lard, usually served with lettuce and/or potato salad; commonly, a slice of lemon is also added to the dish, which is squeezed from the diner on the schnitzel. A version made of pork is called Schnitzel Wiener Art (in Germany) or Wiener Schnitzel vom Schwein (in Austria).

There is a story of Field Marshal Joseph Radetzky - the same to whom Johann Strauss Sr. dedicated his Radetzky March, Op. 228 in 1848 - writing a letter (which was never found, however) to one Count Attems, an adjutant of Franz Joseph, stating «