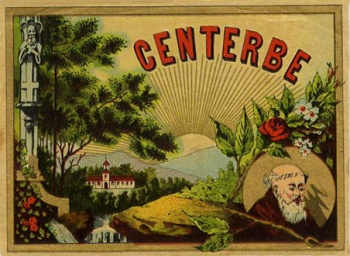 The Centerbe - whose name derives from the Latin "Centum Herbora", is obtained from the slow, cold infusion in environments without humidity or thermal shocks, followed by distillation, of about one hundred species of wild mountain herbs, expertly selected and collected on the slopes of the Abruzzo mountains of Maiella and Morrone, according to an ancient Benedictine recipe, later developed by a pharmacist in the early nineteenth century.
The liqueur has a typical emerald green color, high alcoholic grade of about 70°, and is one of the strongest, as well as one of the most famous Italian liquors. It is believed to be an excellent digestive, is used as a correction of coffee, chocolate, and milk, and can also be added to various recipes.

For centuries, the Centerbe liqueur was produced for home use in many locations in Central Italy, and over time was enriched with flavors, according to jealously guarded recipes handed down from generation to generation, so that every family have their own personal version. The Centerbe variants, as always with traditional recipes, are innumerable, and currently the name is used for a number of similar liqueurs, both industrial and home made.

Among all Italian boroughs, Tocco da Casauria, in the hinterland of Pescara, is permanently linked to the centerbe. From the Middle Ages, travelling pilgrims and shepherds who, along the historical sheep tracks, took their flocks to Puglia for the winter season, would stop for rest at the Abbey of San Clemente, which was along a river, and were offered a strong liquor with an unmistakable flavour. Over time the Abbey went into decadence, but the liqueur continued to be produced in the nearby houses of Tocco da Casauria.

In 1817 Beniamino Toro, a pharmacist and apothecary, who had taken up the local pharmacy, began production of the centerbe, which until then had been a family product, and called it Centerba Toro.

Its special features and claimed therapeutic virtues soon made the liquor famous throughout the Kingdom of Naples, so that during the cholera epidemic of 1884 every day wagons loaded with bottles of Centerba Toro left Tocco da Casauria for Naples.

In this way the Centerba also changed the history of the Toro family and of the small town of Tocco da Casauria, where historically it had its ancestral roots, and became an expression of the nature and traditions of Abruzzo. 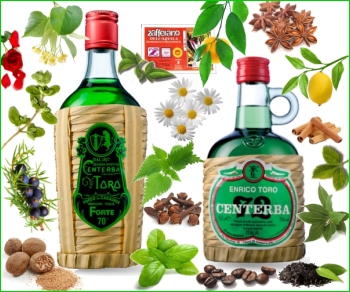 In central Italy this liquor is made in the summer, a season when it is easier to find all the herbs, which is the most complex step. The following list includes herbs and spices that can be found easily.
The basic recipe can be varied by adding rinds of untreated lemons and oranges (1/4 of lemon and/or 1/4 of orange). Also the quantity of sugar can be slightly changed to taste: with 600 grams sugar per 750 grams water a slightly bitter liquor is obtained. However, the amount of sugar cannot be too low, and for 1 liter alcohol it is advisable not to go below 500 grams of sugar. More herbs and flowers may be added to the ingredients according to the season and expertise.

The liquor is good to drink after that period, though it is better to let it season for a year. Serve at cool temperature.
ItalyHeritage on Facebook